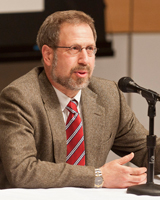 Economics professor, Norman Waitzman, and his co-authors—Scott Grosse, Robert Berry, J. Mick Tilford, and James Kucik—have been nominated for their paper, "Retrospective Assessment of Cost Savings from Prevention: Folic Acid Fortification and Spina Bifida in the U.S." published in the American Journal of Preventive Medicine in 2016.

Since 1986, the Centers for Disease Control and Prevention (CDC) and the Agency for Toxic Substances and Disease Registry (ATSDR) have presented the Charles C. Shepard Science Award to authors of the most outstanding peer-reviewed research papers published by CDC/ATSDR scientists during the preceding year. The award recognizes scientific achievement at CDC/ATSDR and honors the memory of Dr. Charles C. Shepard, whose career was marked by the pursuit of scientific excellence.

Nomination for the Shepard Science Award is, in itself, an honor and nominated scientists will be recognized for their special contribution to the mission of CDC/ATSDR and to public health. The winners will be revealed at the ceremony on June 28, 2017.